From October we start all stationary courses!

We invite you to traditional and online semester programs! 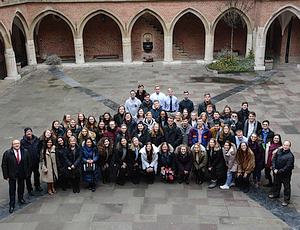 On Friday 17 January 2020, the assembly hall of the Collegium Maius hosted an official closing ceremony of the programme organised at the School of Polish Language and Culture for Bloomsburg University from Pennsylvania, the US. The event was also attended by Professor Armen Edigarian, Deputy Rector for Educational Affairs of the Jagiellonian University. Students received their certificates of attendance, memorial university stamps, and T-shirts with the logo of the School of Polish Language and Culture. After the ceremony, they visited the Jagiellonian University Museum.


The programme was organised for the eighth time by its mastermind and coordinator, Mykola Polyuha, PhD, from Bloomsburg University, and this year's edition attracted 55 students. It consisted of six courses: The European Jewish Experience: A Sociocultural Perspective, East European Film, Literature, and Culture, Post-Communist Transformations in Eastern and Central Europe, History of Architecture, Introduction to Politics and International Relations: Central and Eastern European Context, and World Music: Music in Central Eastern Europe.
We hope that the Bloomsburg students will keep coming back to Kraków in the future. Perhaps they will attend other programmes offered by our University?h na naszym Uniwersytecie.