Learn Polish at the best University in Poland 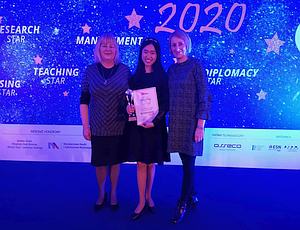 Huiling Zhang, a first-year student in the MA programme in teaching Polish as a foreign and second language, won the 10th edition of the INTERSTUDENT 2020 competition for the best foreign student in the MA category, organised by the Conference of Rectors of Academic Schools in Poland (CRASP) and the Perspektywy Foundation.

Huiling Zhang comes from China and previously earned a BA in Polish Studies in Guangzhou. She began her MA programme at the Jagiellonian University in October 2019. Among her many achievements, the jury was particularly impressed by her Chinese translations of Polish literature, including works by Sławomir Mrożek and Wisława Szymborska. The competition had attracted 70 submissions from more than 30 academic institutions. At the official awards ceremony held in Łódź, Huiling Zhang was accompanied by Professor Renata Przybylska, Dean of the Faculty of Polish Studies of the Jagiellonian University, and Dominika Izdebska-Długosz, PhD, from the Department of Polish as a Foreign Language.